Auto Repair in Mint Hill – What do the Lights on my Dashboard Mean?

If you’ve ever owned a motor vehicle, you’ve most likely been driving around and had a light come on, only to find yourself saying “What does that mean?” This is an understandable feeling. After all, even the most common light, the check engine light, looks different from vehicle to vehicle. Due to this, we’ve made a list of common lights and what they mean so the next time a light comes on in your car, you’ll be informed and ready. 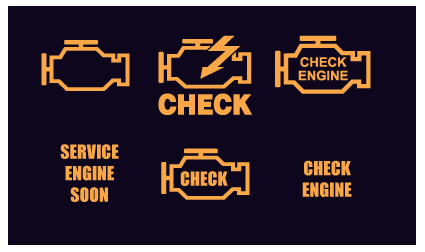 Officially known as the Malfunction Indicator Lamp (MIL) the Check Engine Light is a light that tells you something is wrong inside your engine. It can have multiple forms, but the most common are shown above. In vehicles with OBD II built in (this is all vehicles made during or after 1996) Check Engine Lights also put out a code (you’ll need a code-reader for this) that give a broad diagnostic of the issue. Vehicles equipped with OBD I (these are in most vehicles made during the 70’s to 1995) blink a certain way to tell you what code you have. 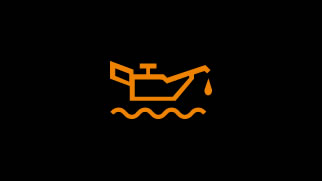 The Oil Light (sometimes called the Oil Pressure Light or Oil Temperature Light) is an oil-can shaped light designed to tell you that there is something wrong with your oil. It can mean that your oil’s pressure is too low, your oil levels themselves are low, or the oil temp is too high. Oil is the lifeblood of the car, and this light should be taken seriously if it comes on. This light sometimes has a squiggly line under it (pictured above) or a temperature gauge with squiggly lines by the oil can.

The Anti-lock Braking System (ABS) Light is designed to tell you if there is a problem with your anti-lock braking system(ABS). The ABS system is why we no longer need to “pump the brakes” to prevent our wheels from locking up and skidding. ABS was created in the 1980’s and is equipped on most vehicles made during or after the 90’s. ABS became legally required on all new vehicles in the United States in 2013.  While the light usually means there is a problem with your ABS system, the sensors on these can go bad causing the light to come on when there actually isn’t a problem with the system at all. Either way, the ABS system is important and it is highly recommended that when this light comes on, you visit your local auto shop.

These lights are the most common indicator lights that come on in the modern vehicle. If you have a light on not mentioned in this article, feel free to call Manchester Auto and Tire of Mint Hill for more information at 704-545-4597

Auto Repair in Mint Hill – What Should I Do if My Vehicle is Recalled?

Most car companies will send mail to you if they have your address, which they should have if you bought your car from a car dealer (this usually excludes dealerships who focus on used cars.)

2. You are usually required to bring the vehicle to the dealership from where it was originally sold.

Sadly, your local independent auto shop cannot do recall repairs, usually due to licensing or legal reasons. The good news is, however, a recall is free if the recall was issued by the manufacturer. For example, if a Toyota is recalled, the repair is usually done at the Toyota dealership who sold it new, regardless of who currently owns it. If you cannot get to that specific dealership, you should attempt to go to your local dealer.

3. If you have the repair done, you should keep the records.

It is incredibly important you keep the records of a recall repair. If something should happen to the vehicle or if you try and resell it, proof that the job has been done is great to have.

If your vehicle ever gets recalled, you can rest easy, you now know everything there is to know about recalls.

Auto Repair in Mint Hill – Should I Replace My Headlights?

Headlights are a crucial part of any car. After all, without them, driving after sunset would be more of a dangerous stunt than a common activity. Headlights, like any other part, wear over time. Replacing headlights, however, are not as cut and dry as “change your headlights at X miles,” but “when can you not see anymore?” To expand on the topic, we spoke with Manchester Auto and Tie of Mint Hill’s co-owner and co-founder Ken Manchester.

Ken expanded on the topic; “A lot of times we don’t realize how bad our own headlights are. After all, we drive them every single day, we aren’t going to notice the hang in visibility as well as we think we can.”

“What you have to check for is the “fogginess.” When you look into your headlight, can you actually see the bulb? Can you see anything in there? If the answer is no, its time to consider new ones.”

We then asked Ken if there is a law about headlight visibility.

“Yea, kinda.” He said. “State inspectors are supposed to fail you if they think they’re too foggy. Its an automatic fail if your headlight is cracked or has condensation in it. If your headlights get to that point, the state thinks they need to go ASAP. Its a safety thing. Ultimately, if you think your headlights need to be replaced, just have them checked by professionals. They’ll tell you whats OK and whats not.”

If you’d like to talk to Ken or his associates, you can call Manchester Auto and Tire of Mint Hill at 704-545-4597 or email them at kenmanchester1@gmail.com